BIO89-100 was engineered using a proprietary glycoPEGylation technology to prolong the biological activity of FGF21 while maintaining the efficacy of native FGF21. FGF21 is an endogenous metabolic hormone that regulates energy expenditure and glucose and lipid metabolism. BIO89-100 has the potential to be the best-in-class FGF21 analog based on the current clinical profile which delivers a compelling risk-benefit profile with the tolerability and dosing convenience necessary for adoption and compliance.

Given the potential of BIO89-100 to meaningfully reduce triglycerides, we are also developing BIO89-100 for the treatment of severe hypertriglyceridemia (SHTG). SHTG is defined as patients with triglycerides ≥500 mg/dL. While currently approved SHTG therapies decrease triglyceride levels, they have limitations. The early data suggest that BIO89-100 could offer robust and durable reductions in triglycerides as well as address other metabolic issues common in patients with SHTG including reducing hepatic fat which is found in a majority of these patients. These broad effects of BIO89-100 could make it a highly differentiated new therapy for this condition.

Learn more about the BIO89-100 trials at clinicaltrials.gov

What makes FGF21 such a promising target?

FGF21 is an endogenous metabolic hormone with broad effects regulating energy expenditure and glucose and lipid metabolism. FGF21 has been shown to reduce liver fat by increasing fatty acid oxidation, reducing the formation of new fat in the liver (de novo lipogenesis) and reducing systemic levels of triglycerides (fat). FGF21 agents have shown benefits in reducing fibrosis in the liver. This effect is mediated through two potential pathways.

First, by improving metabolic regulation, it reduces ongoing liver injury, thus giving the liver time to heal. Second, FGF21 generates an on-target effect to increase adiponectin, a hormone released from adipose tissue that can, among other functions, suppress the development and progression of liver fibrosis. In addition to its effects on the liver, FGF21 has been shown to reduce systemic levels of lipids (triglycerides and LDL cholesterol) as well as improve glycemic control.

FGF21 therapies such as BIO89-100 have a number of diverse beneficial biological effects, including effects on the liver, fat, muscle, and more

NASH: A serious liver condition for which there are currently no therapies

NASH is a severe form of non-alcoholic fatty liver disease (NAFLD) characterized by inflammation and fibrosis (scarring) in the liver that can progress to cirrhosis, liver failure, and liver cancer. The prevalence of NAFLD, which affects approximately 25% of the global population, and NASH, which develops in approximately 20% to 25% of NAFLD patients, is growing and is driven primarily by the worldwide obesity epidemic. Patients with NASH frequently have other significant metabolic co-morbidities such as obesity, high blood sugar, elevated cholesterol and triglycerides, and systemic hypertension (a constellation commonly referred to as metabolic syndrome), and hese further contribute to the risk of cardiovascular disease.

The number of NASH cases in the US is projected to expand from 16.5 million in 2015 to 27 million in 2030, with similar prevalence growth expected in Europe. Diet and exercise are currently the standard of care for NAFLD and NASH, but adherence is poor, and there remains a high unmet need in the treatment of NASH.

Hypertriglyceridemia is characterized by elevated levels of triglycerides (a type of non-cholesterol fat). When levels of triglycerides are severely elevated (≥500 mg/dL), the condition is known as SHTG and is associated with an increased risk of NAFLD, NASH, and cardiovascular diseases, as well as acute pancreatitis. It is estimated that there are up to 4 million patients in the US with triglyceride levels ≥500 mg/dL. Of these patients, it is estimated that up to 56% have excessive liver fat and up to 70% have elevated cholesterol or type 2 diabetes.

This patient population is expected to increase due to the triple epidemic of obesity, metabolic syndrome, and Type 2 diabetes. A large portion of these patients are unable to achieve treatment goals with existing therapies. In third-party studies, up to 50% of treated SHTG patients were unable to reduce their triglyceride levels to <500 mg/dL despite using certain approved drugs. Further, while these therapies may decrease triglyceride levels, they generally do not have broader beneficial metabolic benefits. 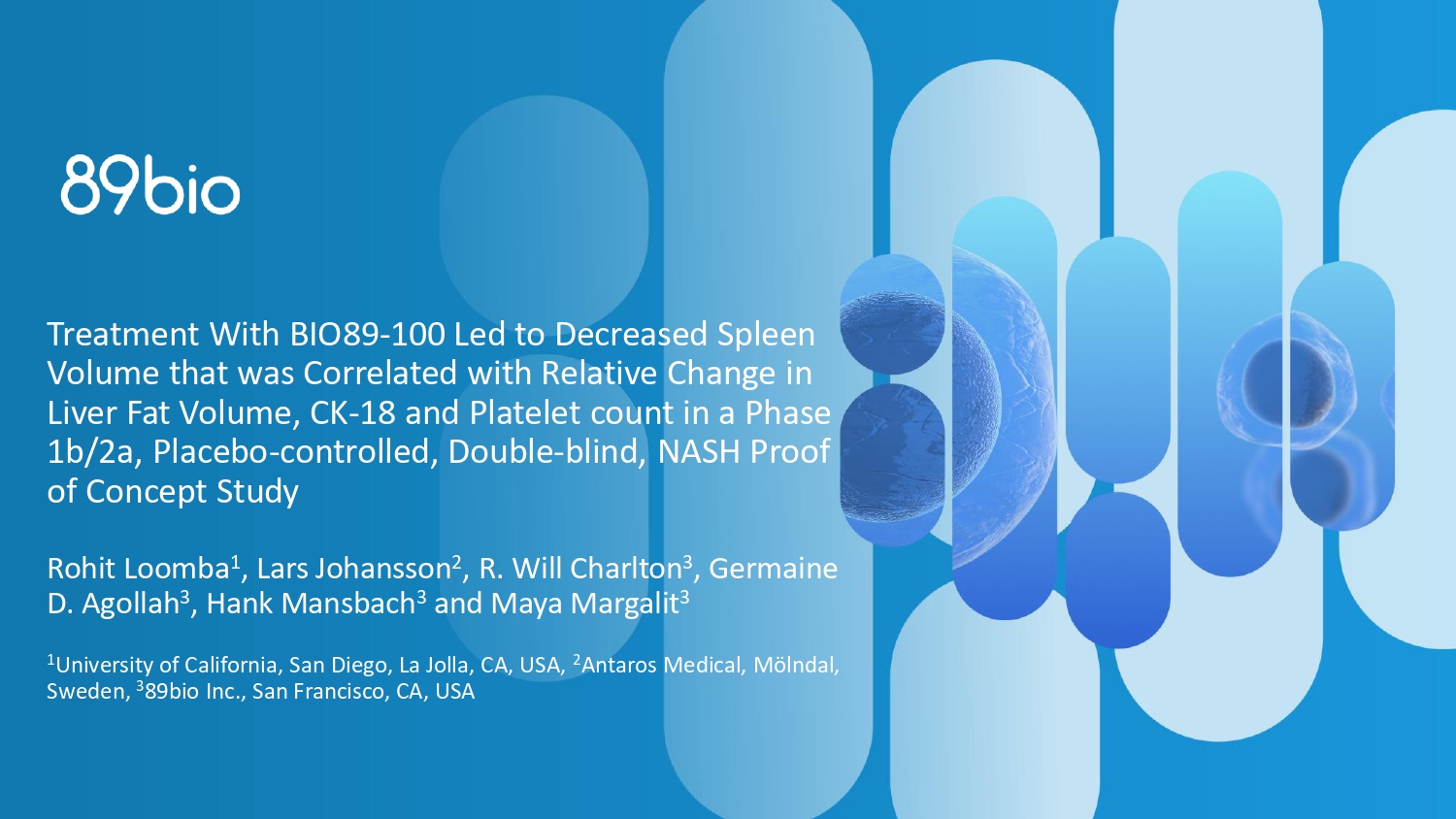 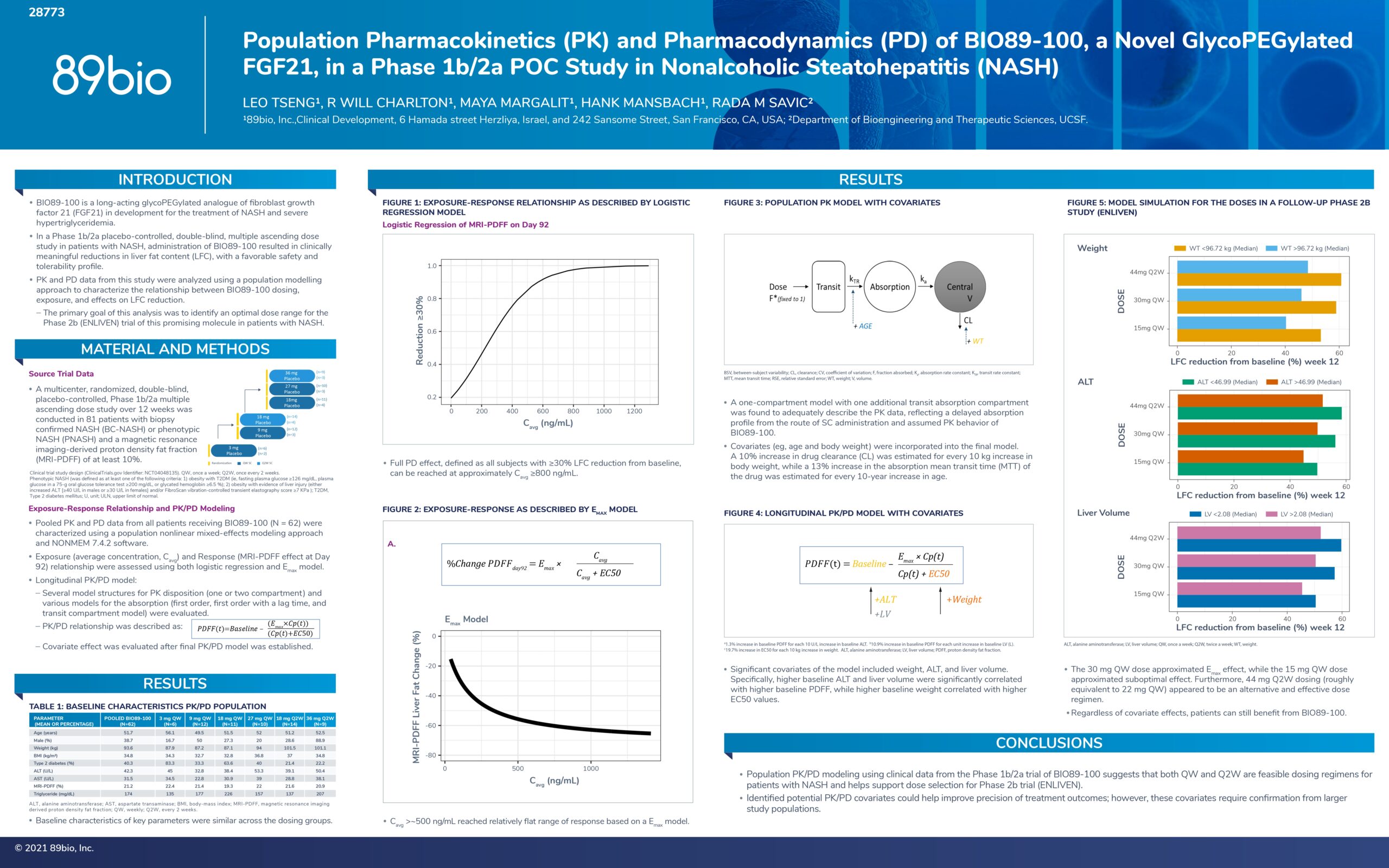 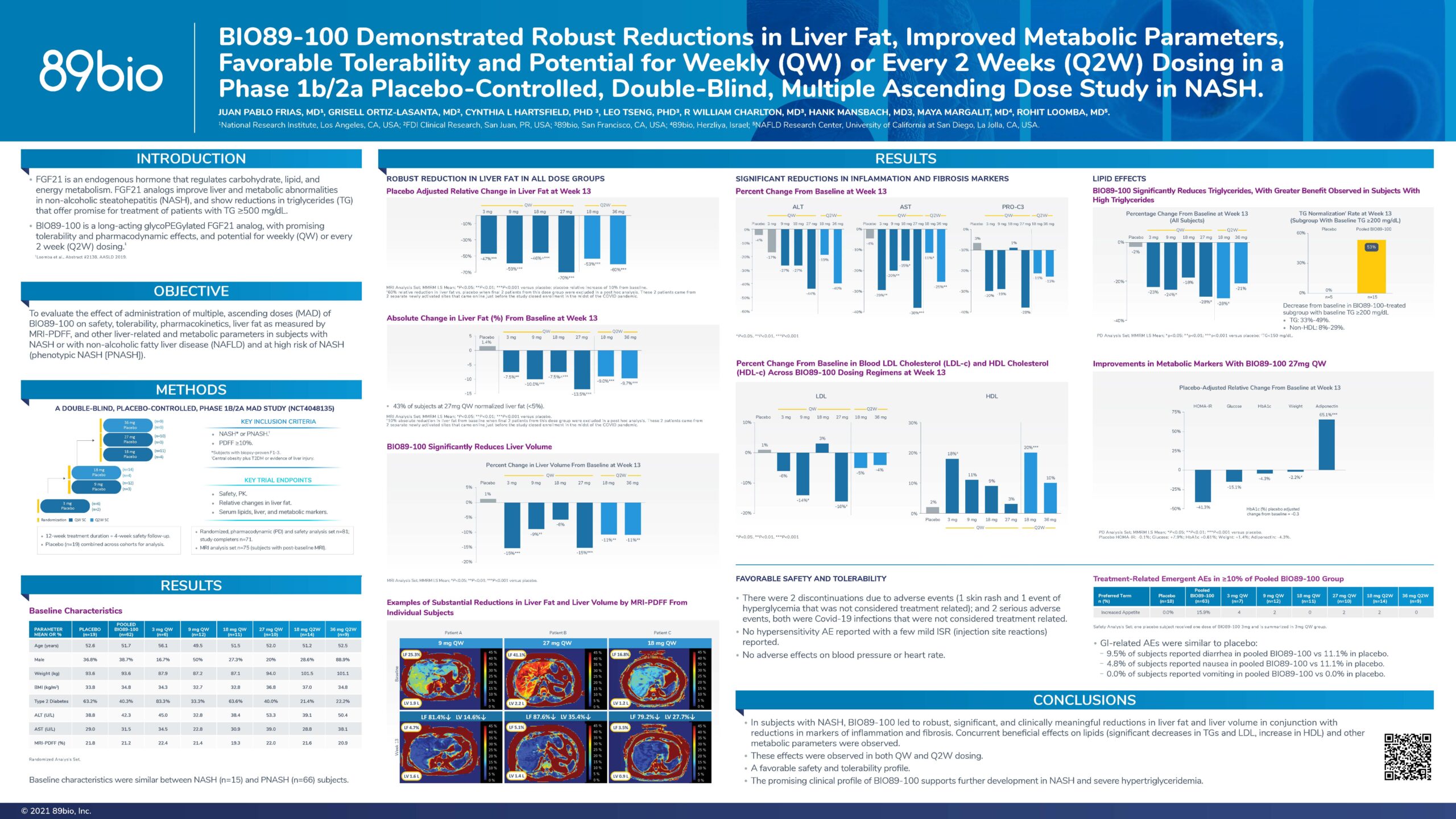 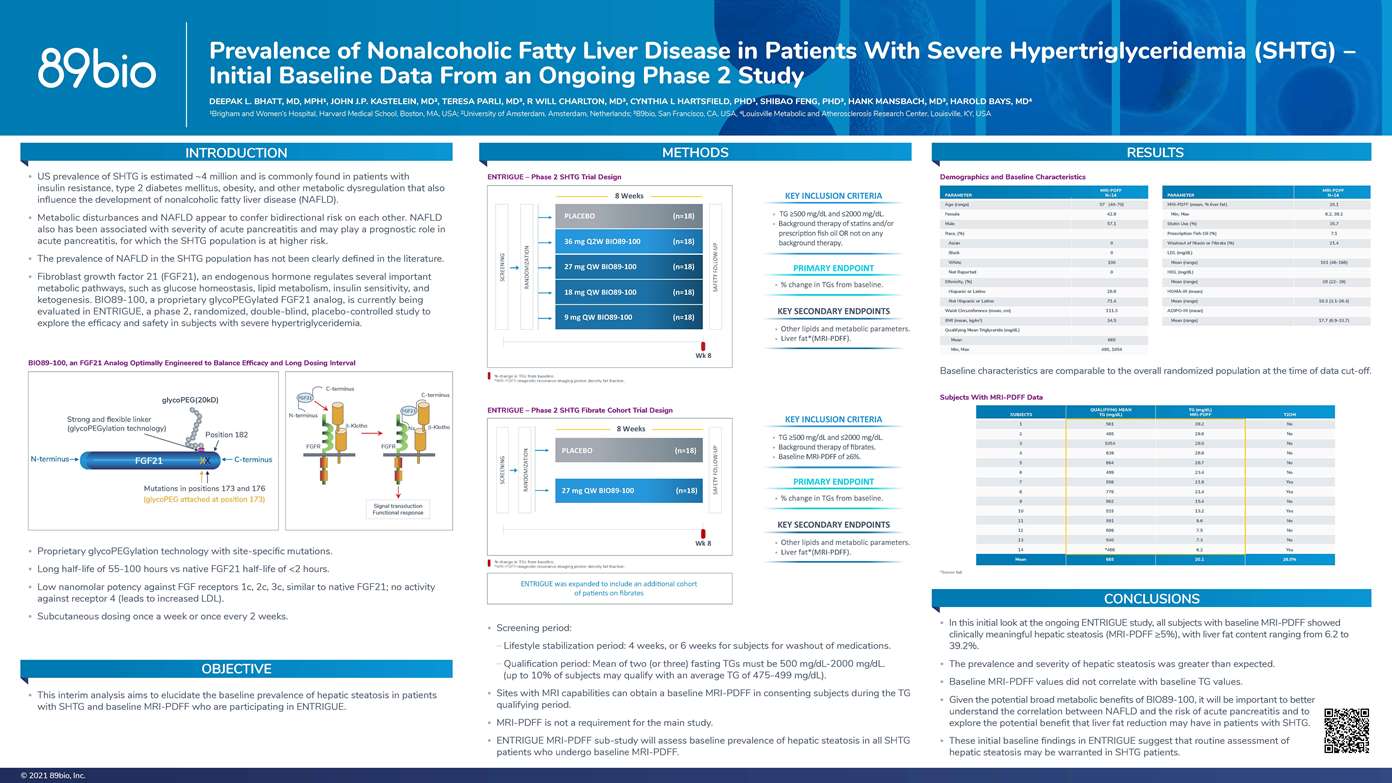 Prevalence of NAFLD in Subjects with Severe Hypertriglyceridemia: Initial Baseline Data from an Ongoing Phase 2 Study 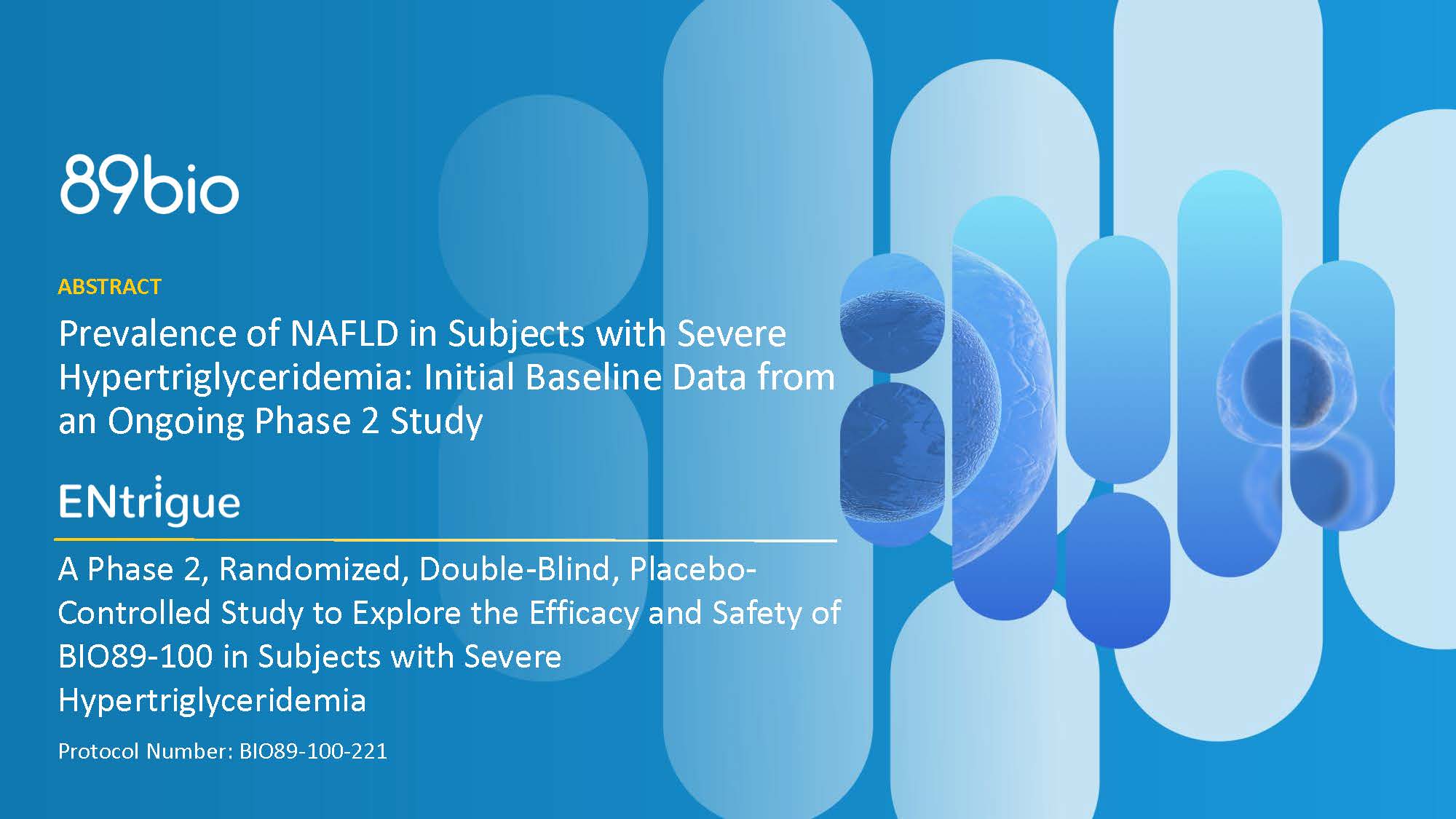 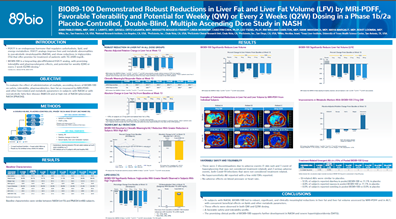 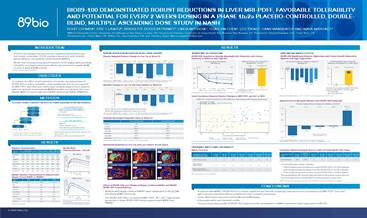 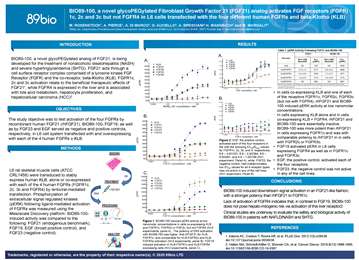 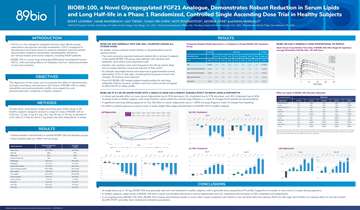